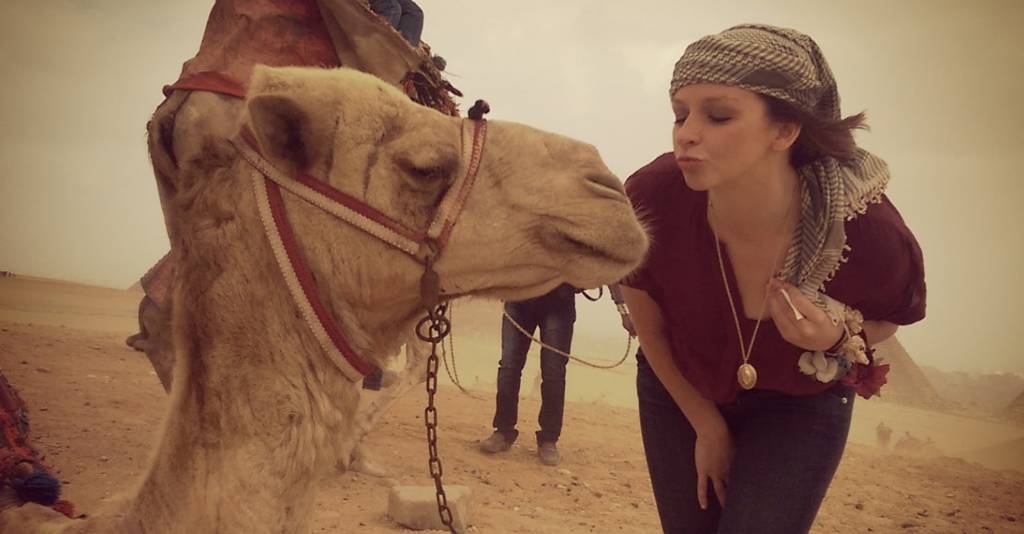 As naïve as I am, I expected Cairo Egypt to be a dirtier version of New York City. My friends, family, and co-workers begged me not to go. I have a tendency to want to do something even more once I’m told I can’t or shouldn’t. I booked Cairo on the last leg of my three week backpacking trip. Not to sound sappy, but I’m pretty sure it changed my life and opened up a new world for me. My travel to Cairo exposed me to world I didn’t know existed.

I did a lot of research on getting a visa. For example, the visa guy at the counter will say the document costs $40, when it really only costs $25, to make an extra couple bucks for himself. In my research, I read that I didn’t need to wear a hijab, but I needed to keep my legs covered and have sleeves down to my elbows. This research was to placate my worried followers back home.

All the research that I did, wouldn’t have prepared me for what I experienced in Cairo. Just to preface my descriptions, my emotions and culture shock were negative at the time. Now I can see how they have changed who I am as a person. I don’t look back on my experience with regret.

I was nervous getting off the plane and setting foot in Africa, a country known for unrest. I found the window to buy my visa and man behind the counter tried to trick me, but I was firm on the price and there were no arguments. That evening after landing, I met my friend and co-worker, Tarek, at the airport. Tarek and another co-worker, Mohamad, were the ones that convinced to me to extend my adventure down to Egypt. My retort for every argument not to go was- when else in my life will I have the opportunity to go to Cairo as a single white female? I digress, I was immediately hit in the face with cab drivers and luggage carriers trying to convince us to get in their car. The airport and the drive to the hotel was just the beginning of the chaos I was about to experience.

I stayed at a Hilton hotel in downtown Cairo. Traveling as a consultant for work, I get tons of hotel and airline points. A one night stay in a non-major US city would run about 40,000 Hilton points. In Cairo, my hotel was only 10,000 points a night. I felt completely safe in the hotel. Every car that entered the gate required the driver’s information. To enter into the lobby, you had to go through what is similar to a lower technology, airport security setup. I was amazed at the level of hospitality I received in Cairo. The breakfast was to die for (there was a chocolate fountain with strawberries and fresh honeycomb with honey dripping into bowls). Every hotel employee was beyond gracious, nothing like what I’ve experienced in America or Europe.

Tarek met us in the morning with a private tour guide and driver. It was the best surprise. The tour guide took us into the Citadel. We went to the Sphinx and Pyramids of Giza. The experience was unforgettable to have your own private tour guide chauffeuring you around the pyramids. This was my first day seeing Cairo in the daylight. I had the emotional rollercoaster of “everything is amazing” into “this is completely different to what I’m used to” to the lowest “I can’t believe this is happening.”

The traffic in Cairo is absolutely nuts. At one point, we took a wrong turn and were trapped in bumper to bumper traffic. Sitting in the front seat of the vehicle, I had never had so many people staring at me. I was dressed appropriately and wasn’t being the normal “obnoxious CK self” that I usually am. It’s because I was a white female. I had girls come up and ask to take my picture and men catcalling me. A memorable shout out I’d like to recall, “I will kill my wife for you,” was incredibly alarming/entertaining.

We went to a souk (an outdoor flea market) and walked around looking for trinkets to take home. Everything was beautiful, but the entire experience was incredibly draining. I felt completely over stimulated by the constant commotion all around me. Stand owners would yell at one another, the cat calling, and the human traffic of disarray. Typically, everyone walking in one direction will stick to the right side of the sidewalk in most first world countries. In Cairo, you walk wherever the hell you want. This includes stepping over the baffling amounts of garbage littered throughout the city (there is no waste management system), stepping over dead carcasses of stray animals, all the while trying not to get lost in the sea of people….everywhere you turn.

On the bright side, one thing I took back with me, was the feeling of respect and hospitality I experienced. I was fortunate enough to make the acquaintance of one of my now closest friends, Saied (see post). Every shop our group went into, the girls were asked to have a seat while they brought any item you wanted to you. Tea was promptly provided while you sat on your stool and perused the trinkets they presented. If the shopkeeper didn’t have it, their uncle’s brother’s cousin did. Trust me, I was on a very specific search for African cat statues to bring home to my sister.

Don’t get me wrong, I’m a feminist, I truly believe that women deserve every right that men are biologically born with and denied to women. But, it was almost as if I had taken a step back in time where women were treated with the upmost chivalry and treated like goddesses. It was an experience unlike any other. I wish that we had more of that back in our first world countries (eh hem…).

Saied took the group of us to dinner at an authentic Egyptian restaurant called Abo Ramy. The food was absolutely delicious, but also led to one of the most painful (now humorous) times of my life. I woke four hours later, projectile vomiting all over this beautiful Hilton bathroom, where I stayed for the next 10 hours. I still remember every detail of the tile, the awkward positioning of the bidet, and the carefully crafted towel swan (like the ones you find on cruise ships). The next day was filled with pure agony and self-loathing. Traveling while violently ill, isn’t something I’d wish on my worst enemy (or ex boyfriends).

Cairo was the last stop on my trip and was set to fly back to the US. I was on the constant look out for the most conveniently located restroom and the path where I could avoid the most people while doing so. I thought things couldn’t get worse, until my suitcase broke. I had to carry my rollie suitcase in my arms with the extendable handle jammed. I would get fatigued (or worse) easily and would have to take breaks frequently just to transport myself down the hall. To make matters worse, on my 8 hour flight from Paris to New York I was positioned in a window seat. If the people I sat next to on that flight are reading this, my deepest apologies for all you endured. But, I survived!

Cairo was the best and worst part of my three week adventure. I experienced poverty that no documentary could ever prepare me for and the kindness and graciousness of the people I met will always remain in my heart. I think that Cairo changed me for the better. I’d like to go back someday soon with new expectations and potentially stomach pills.