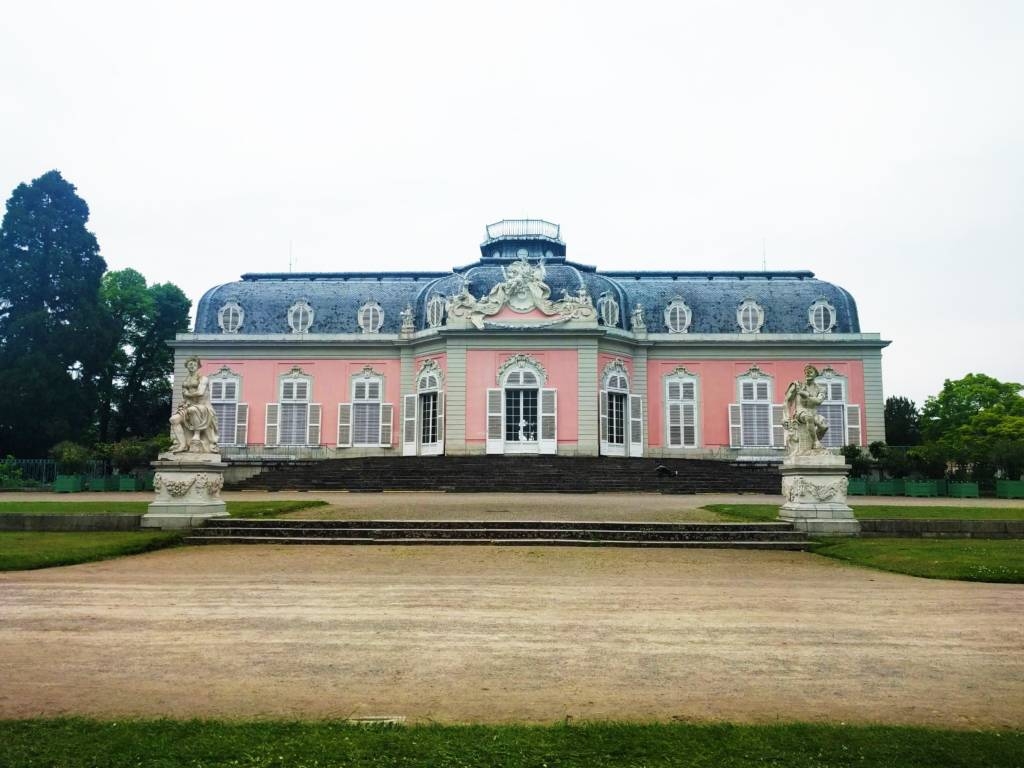 Düsseldorf is really beautiful. They have a magnificent old town and a great nightlife scene. I couldn't believe the amount of shopping in Düsseldorf! I window shopped, but wouldn't allow myself to go into the many stores, because I only have a backpack. I knew it would only go down hill if I took one step inside one of the shops. When researching things to do in Düsseldorf, I came across this beautiful, pink Benrath Palace. I only had two days in the city, and this was among the top of my list.

As per usual, I got on the wrong train and arrived late to the tour of Benrath Palace. Fortunately for me, it was a Monday and they weren't very busy. They said to wait a few hours and they would get a tour guide for me!

I went to a shop around the corner, got a sandwich and sat myself down on a park bench overlooking the lake and palace. I wasn’t alone though, I had two swans and their babies keeping me company. Fortunately, I had downloaded a few documents to work offline and the few short hours passed by quickly.

When I returned to the desk, I was pleasantly surprised that I was going to receive my very own private tour of Benrath Palace! My guide led me into the palace through the servants entrance. Here, we had to put on slippers over our shoes. I understand why, because the palace had magnificent marble floors.

*Benrath Palace was constructed as a hunting "lodge" for Elector Karl Theodor. The Elector and his wife hardly stayed ONE NIGHT in this gorgeous palace. But, eventually Napoleon Bonaparte stayed here for a couple days. It's a shame I wasn't alive during this time period. I would have gladly volunteered. 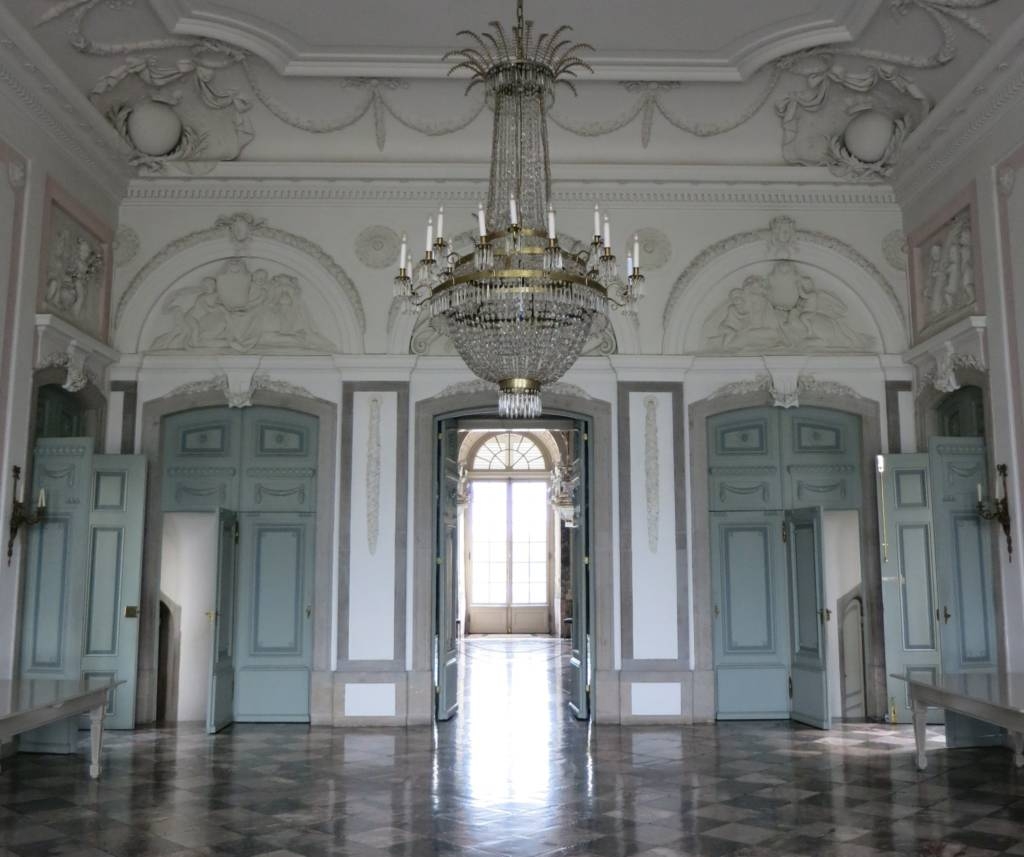 The location and beauty of Benrath Palace was designed to be a reminder to those passing by. At the time, this spot was where anyone travelling to Cologne would have to pass. The idea was that passerbyers would see the stunning palace and be reminded of Elector Theodore's power and wealth.

The entire palace was designed with symmetry in mind. If there were six windows in a room on the left side, there had to be the same six on the right. Every room was intricately decorated. You could walk into every room in the palace and never see the same design twice.

Benrath is filled with many alcoves and hidden doors, even underground tunnels. This was so the servants weren't seen. They could come and go discretely. The servants even had to transport the food from another building, because the kitchen wasn't attached to the palace. 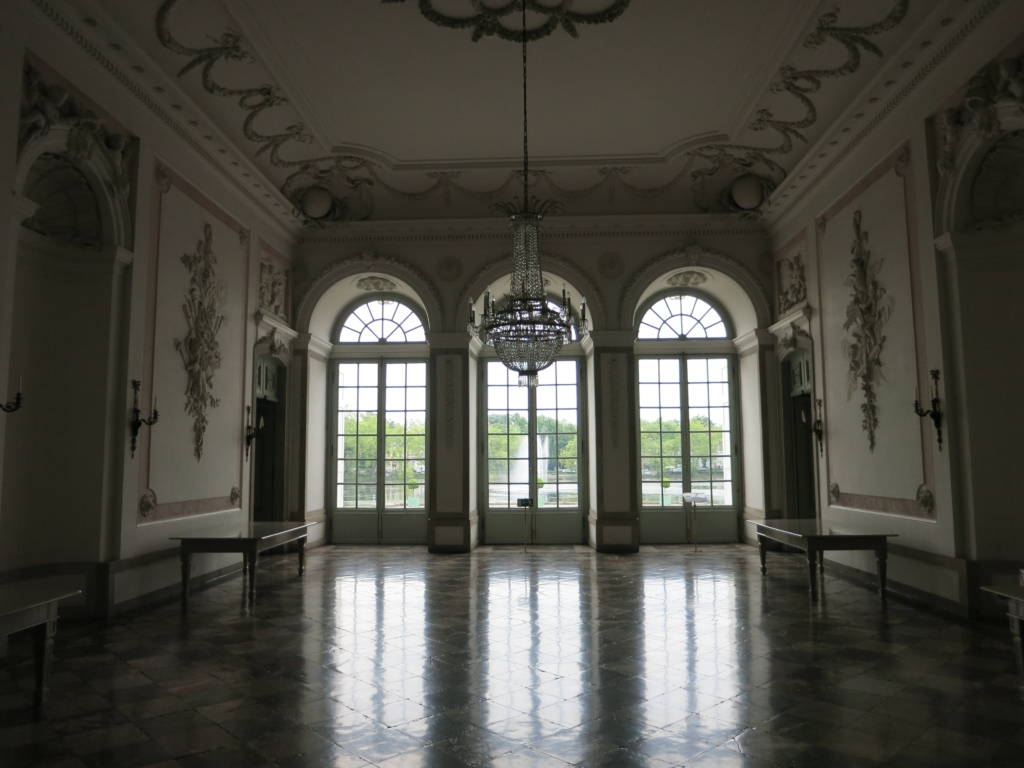 When you walk into the Grand Salon and look up you see a giant dome. Hidden in the alcoves are places for an orchestra to sit. The idea was for the guests to walk into the room and think the music was coming from the heavens. The doors are designed to extra wide for the ladies' skirts, which could be as wide as an arm span.

The second floor has four apartments for high ranking guests, which are more intimate, but still grandiose with attached parlors. Guests weren't allowed to see the Elector or Electress without an invitation. This required them to need an appropriate room to entertain themselves.

After thanking my private tour guide and returning my slippers, I strolled around the massive gardens before taking my tram back into town. What an amazing experience to get a private tour of such a stunning palace!

The Hike to Burg Eltz
Old and New in Warszawa, Poland