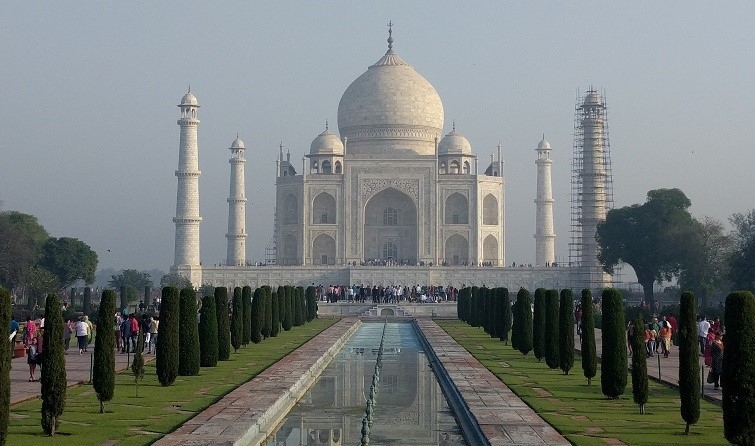 Many dream of feasting their eyes on the beautiful, marble mausoleum of one of India's most famous site, the Taj Mahal. This UNESCO World Heritage site was built in 1632 by Shah Jahan to house the remains of his beloved wife, Mumtaz Mahal (his favorite of three wives), who died from complications after giving the King their 14th child together.

The structure is built of beautiful white marble, which has precious, hand carved, semi-precious forming intricate designs around the exterior. Today, over 3 million tourists come to see this iconic structure. On the Cultural Tour of India with TAV Tours, we went to Agra the night before to prepare for an early morning.

Note: The Taj Mahal isn't open on Fridays. Don't ruin your trip without checking the times.​ The night before I was preparing for this exciting, bucketlist event, by watching YouTube videos on how to tie a ​sari. I had bought the beautiful pink and blue fabric when I was in Jaipur. The salesman made it look SO easy to tie, so I thought I would practice the night before.

It turned out, it's much more difficult to tie a sari than I had originally imagined. Dejected, I decided I better error on the side of caution and wear Western clothes for the Taj Mahal event.​

We got to the Taj Mahal right before 7am. It was absolutely perfect timing, because right after we bought our tickets, we walked through the line and through security. There are four lines to enter the Taj. One for foreign men and one for foreign women, then a line for Indian men and one for Indian women. I do understand having separate lines for men and women, because there is additional security with purses and bags (and the Indian culture is very conservative). But, I thought it was weird segregating the Indians and the non-Indians.

​We entered the area through the main pedestrian entrance, the Royal Gate. As you walk through the entry way, you begin to see the perfect symmetry of the architecture. The Taj Mahal starts to appear through the gate at the end of the building. The Taj Mahal is truly as breath taking as I had imagined. I was blown away with how grand and beautiful the structure was. A major reason I enjoyed it so much, was due to our guide and the timing. Had we waited just another hour to come in, the sidewalks would have been filled with tourists. Yes, it was busy first thing in the morning, but I can't imagine what it would have been like later in the day.

Our guide told us the history of the buildings and the Mughals, as we walked through the gardens, making our way to the building. The inside of the Taj Mahal, is much less impressive. The interior is a cramped, circular area surrounding the tombs of the Maharajah and his wives. I recommend going through it, but making your way out after a few minutes to walk around the building. If it's a nice day outside, find a bench in shady spot and enjoy the building in it's magnificence. I decided to take a seat on the same bench Princess Diana sat.​ 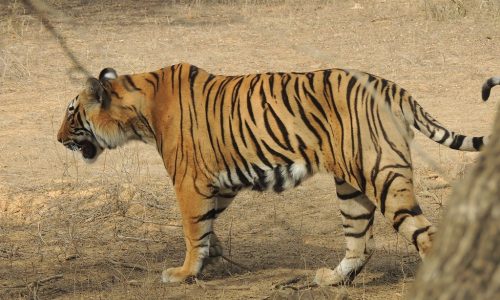