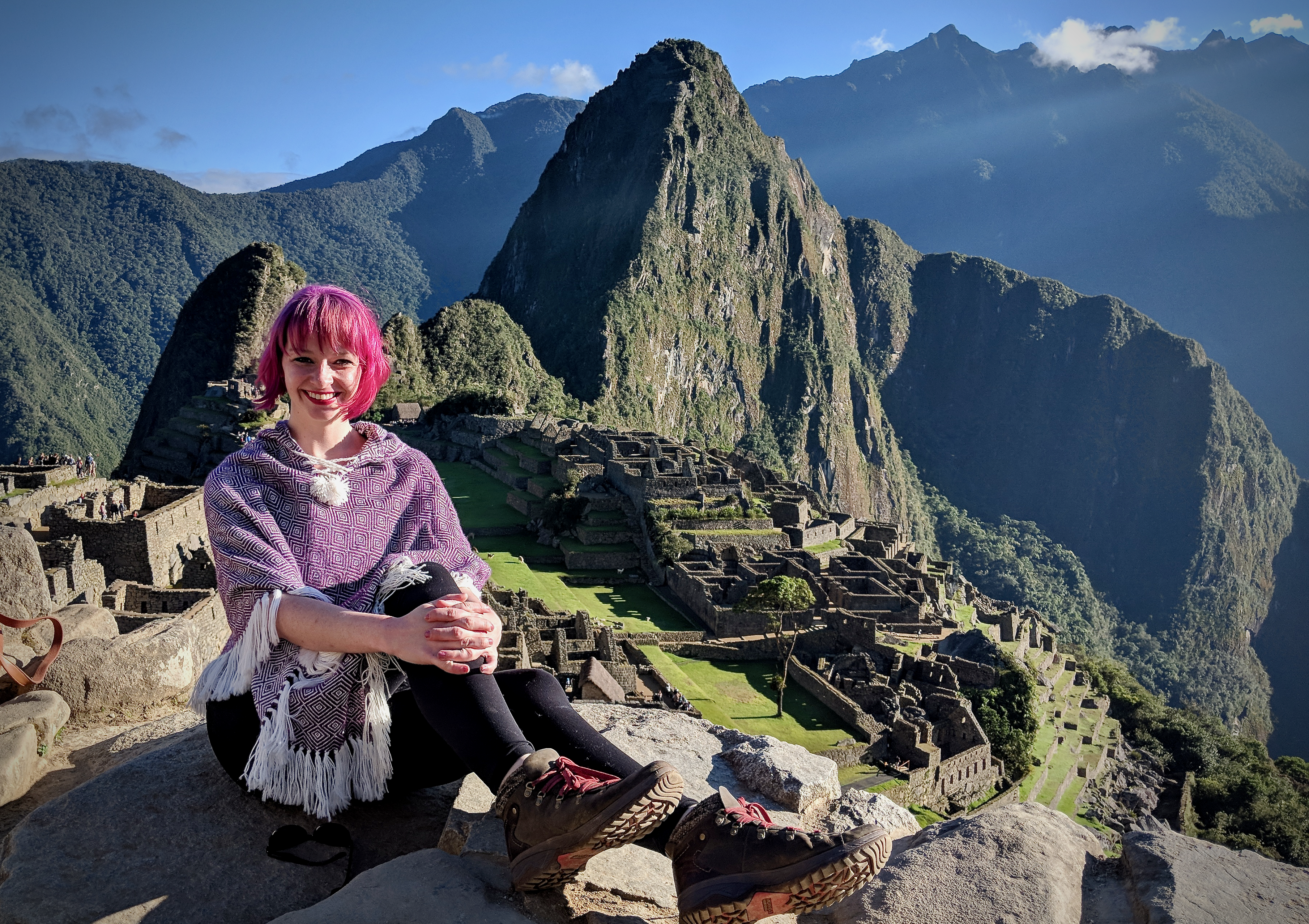 After a long day trekking on the Inca trail, Eric and I had comfy beds and hot showers to look forward to. Machete Tours had arranged a night stay at the Inca Tower hotel in Aquas Calientes. I hadn’t had a hot shower since I had arrived in Peru (I’ll half blame it on me getting the hot and cold knobs confused and the other half on South American plumbing). Regardless, this hotel felt like pure bliss.

I was so exhausted from the butt busting climb, I think I fell asleep before my head hit the pillow. But the next day held even more excitement ahead. Jennifer, our spunky Peruvian tour guide was giving us the full tour of Machu Picchu, which translated from the native Quechua language means “Old Peak.”

Getting to Machu Picchu

Yesterday, we had trekked the Inca Trail to enter Machu Picchu by the Sun Gate entrance (read about it here). Today, we were catching a bus from Aquas Calientes up to the tourist entrance of Machu Picchu. People from all over the world began lining up for the bus as early as 4 in the morning. Eric and I talked about seeing Machu Picchu for sunrise, but the prior evening distracted us with too many pisco sours (the signature Peruvian cocktail).

The next morning, Eric, Jennifer and I jumped in line just after 6am and stepped foot on the Incan citadel around 7am, which isn't bad considering how many people were in line! The large tourist buses whip back and forth climbing the dirt road to Machu Picchu, which is undetectable from the base of the mountain. I had to laugh people would gasp at the speed of the buses taking the switchback turns.

The infamous Inca emperor, Pachacuti, began the build of Machu Picchu around the 1450’s. It’s purpose is believed to be a place for the Incas to go on vacation, relax in the mountains, and perform spiritual rituals - more on that later! Machu Picchu consists of amazingly preserved palaces, baths, temples, agricultural storage, and almost 150 houses.

Machu Picchu was still being built when the Spanish arrived in 1530’s, forcing the empire to fight against the Spaniards and the many diseases they brought with them. The Incas had no immunity or medical knowledge of small pox, measles, and the flu and began to disappear from power. Fortunately the Spanish never made it to the Sacred Valley or Machu Picchu, which is why they are still intact today. Any evidence of the Inca empire slowly sunk into the vegetation of the mountains.

The expertly carved terraces and Inca treasures of the citadel lay untouched until 1911 when American archaeologist, Hiram Bingham, discovered the sleeping city. Bingham arrived in Cusco and spoke to the locals about his quest. A local farmer mentioned ruins on nearby mountain - Machu Picchu. Bingham tried to hire the farmer to take him up the mountain, but he was very busy tending to crops. But, he offered Bingham his son, Pablito Álvarez, to take him up the mountain. Thus an 11 year old boy, became the first tour guide of Machu Picchu. Walking Through the Past

As soon as we entered the UNESCO World Heritage site, we made a beeline to the top of the mountain to take photos before the place was ridden with tourists. Eric and I decided to be the ‘typical tourists’ and wear our baby alpaca sweaters. Jennifer hinted that they were probably not REAL baby alpaca fur, but I was happy enough believing that they were.

When you first see Machu Picchu, you feel absolutely awestruck. The intricacy, the steepness of the mountain, and sheer size of this view leave you breathless. I tried to imagine a city bustling with people. Jennifer explained how the royals rarely mingled with the plebeians and the city was divided based on class. We came across a sacrificial stone with 3 steps representing the underworld, Earth, and the sky or heavens. Jennifer explained that the Incas had a very specific ritual, which was surprisingly humane. The sacrifice was typically a child from the age of 8 to 11 or a very beautiful female. The victim wasn’t allowed to eat meat or have sex one week before the ceremony. On the day of the ceremony, they would serve the victim an herbal concoction of ayahuasca, causing hallucinations. Then, a mixture of coca leaves would be administered to put the sacrifice to sleep. Once anesthetized, a priest would cut the victim from breastbone to stomach. The priest would expertly read the future from the contents of their stomachs.

Llamas were also used as sacrificial offerings, but only black, female llamas. Jennifer and I joked that since it was always middle aged men that chose the sacrificial victim, it was Eric’s turn to pay his dues as sacrifice, being the only male. For some reason he didn’t find it as funny as we did. I loved walking through Machu Picchu and listening to Jennifer re-tell the folk tales of the Incas. As the morning progressed the heat and the number of tourists begin to increase - that was our cue to catch a bus back down the mountain to Aquas Calientes.

*Make sure to get your passport stamped on the way out of Machu Picchu!

Our trek with Machete Tours was an experience I'll remember for the rest of my life. It allowed me to take a break from "traveling mode" where you have to plan and stay on your toes, I was able to have a vacation and not have to think about the details. Plus I was traveling with one of my best friends and made a new friend too! 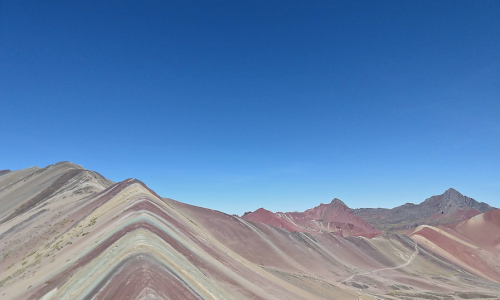