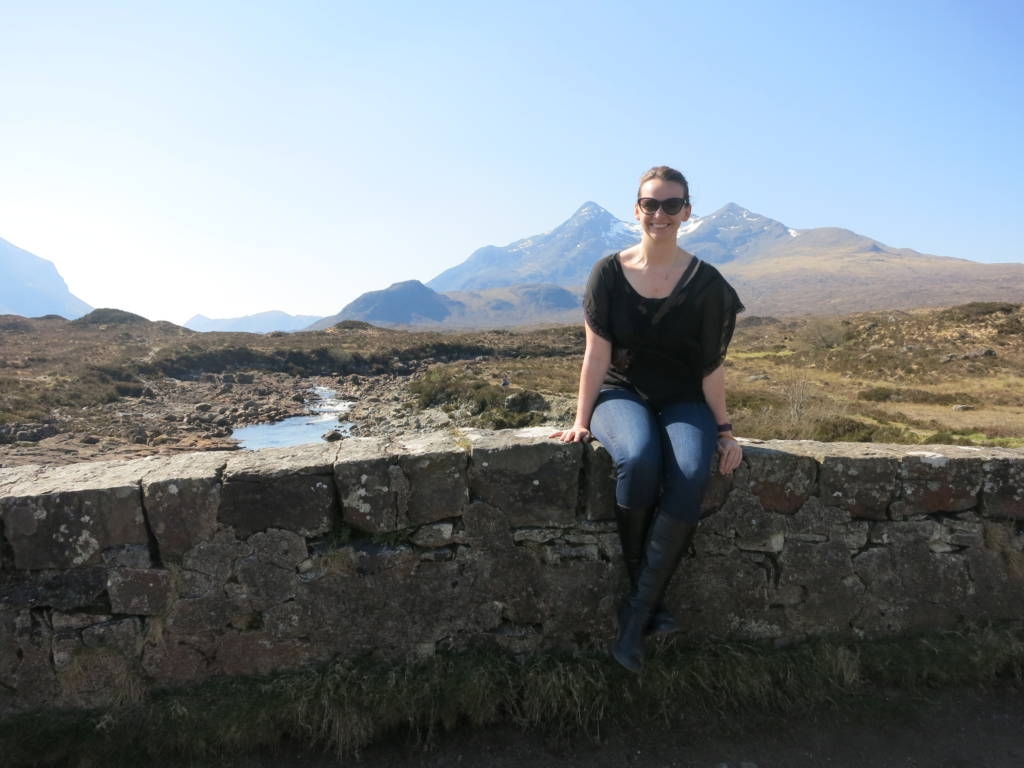 My trip to the Highlands could not have come at more perfect timing. I just finished the TV series of Outlander and the northern part of Scotland is absolutely gorgeous. I was able to explore the "nature-ous" side again, plus plenty of Scottish whisky.

There are a number of ways to get to the Highlands from Glasgow and Edinburgh. You can take a bus/train, rent a car, or take a tour. I was short on time and opted for a tour for a 3 Day Isle of Skye Tour from MacBackpackers. I don't usually support organized tours, but this one was exceptional! It was a great value for the money, we made stops at grocery stores to keep costs down, and stayed in hostels! The best part of the tour is that it was 13 women and one dude. Poor guy! Brian seeking shade, or secretly hoping to get run over.

The Highlands of Scotland are known for the devastating Jacobite Rising. The Scots hoped to put the Scottish King Charles Stuart on the English throne in 1745 date. Bonnie Prince Charlie sailed to Scotland to gather up the troops and restore his father's right to the throne. The battle of Culloden ended in a massacre of the rebellious Scots.

If you're interested in the history there is an amazing museum outside of Inverness on the battle ground where they fought in Culloden. The museum shows the build up to the battle both from the Scottish and English side. A panoramic reenactment of the fight isn't for the faint of heart, but gives you an idea what it would have been like to be there. You can get an audio guide to go out into the field and learn about those who died.

The Outlander series is about a woman who is on holiday with her husband in Inverness, Scotland, where they are doing research on his ancestors. Claire breaks away from the research and explores a group of standing stones. As she gets closer she is drawn to the stones and when she touches them she wakes up in 1742. Claire finds herself in a number of adventures and finds herself falling in love with a handsome Scots man, who regularly plays the knight in shining armor.

I did a fair bit of research on trying to find an Outlander tour to see the sights. Most of the tours were booked until the end of the year and were insanely expensive. Luckily, our MacBackpackers guide knew all the sights and history of the filming and Diana Gabaldon's books. I'm not sure if a little of his manhood was hurt in having to admit this to me. 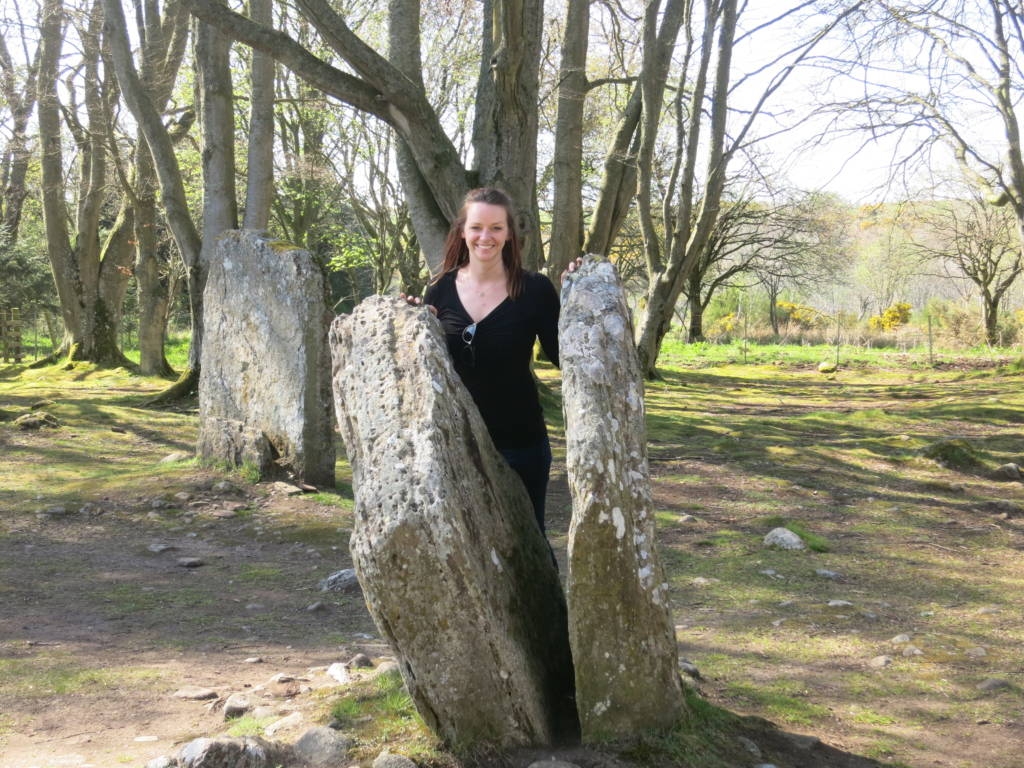 In the Outlander TV series, the stone is a large standing stone. But, in the book it's actually a stone split in half. Unfortunately for me, no handsome Scotsman was on the other side, so I settled for traditional Scotch whisky instead. 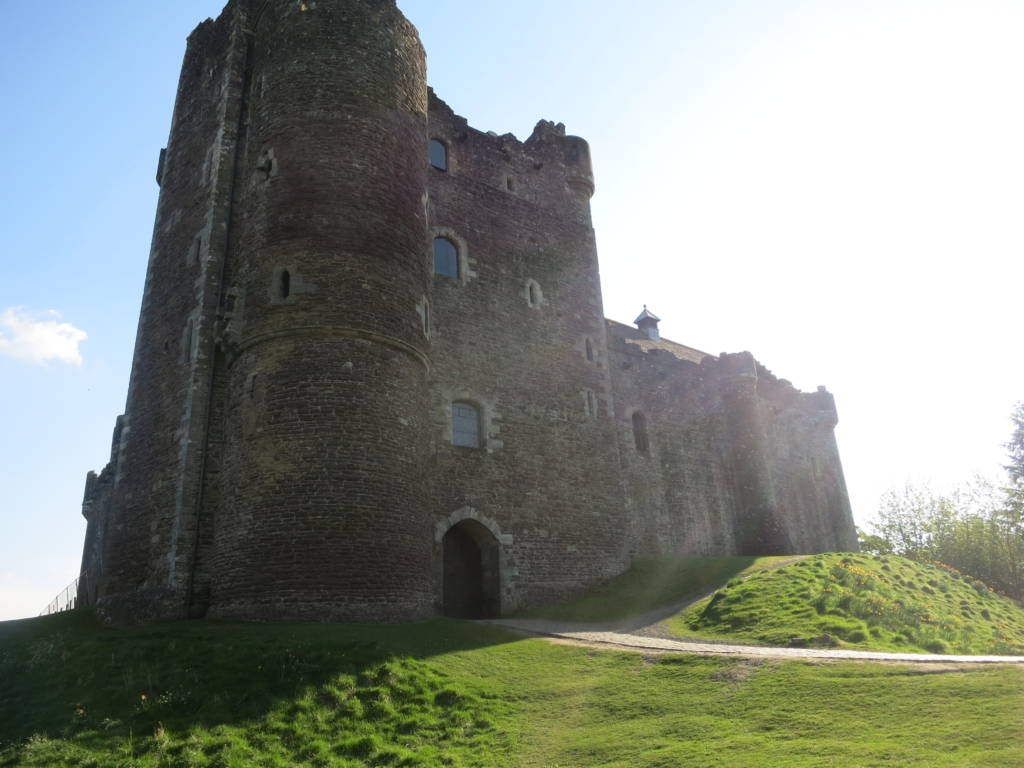 Castle Leoch wasn't only in Outlander, but in the Monty Python movie. The movie was so low budget, they used the same castle, actually named Castle Doune, from different angles to make it look like different castles. The kitchen inside the castle is exactly the same as it was in Outlander! They didn't change anything for the filming.

Other Must See Sights in the Highlands​

If you drive to the Highlands you have to take a view of Loch Ness, where the infamous Loch Ness monster is supposed to lay hiding underneath the dark depths of the water. Unfortunately, no ​sightings, but gorgeous views had to suffice.

The tour not only gave me some great Outlander spots, but I was able to see the breathtakingly beautiful sights of the highlands. One of my favorites was the Eileen Donan castle. Quite a few of the castles are still inhabited by the clan leaders. 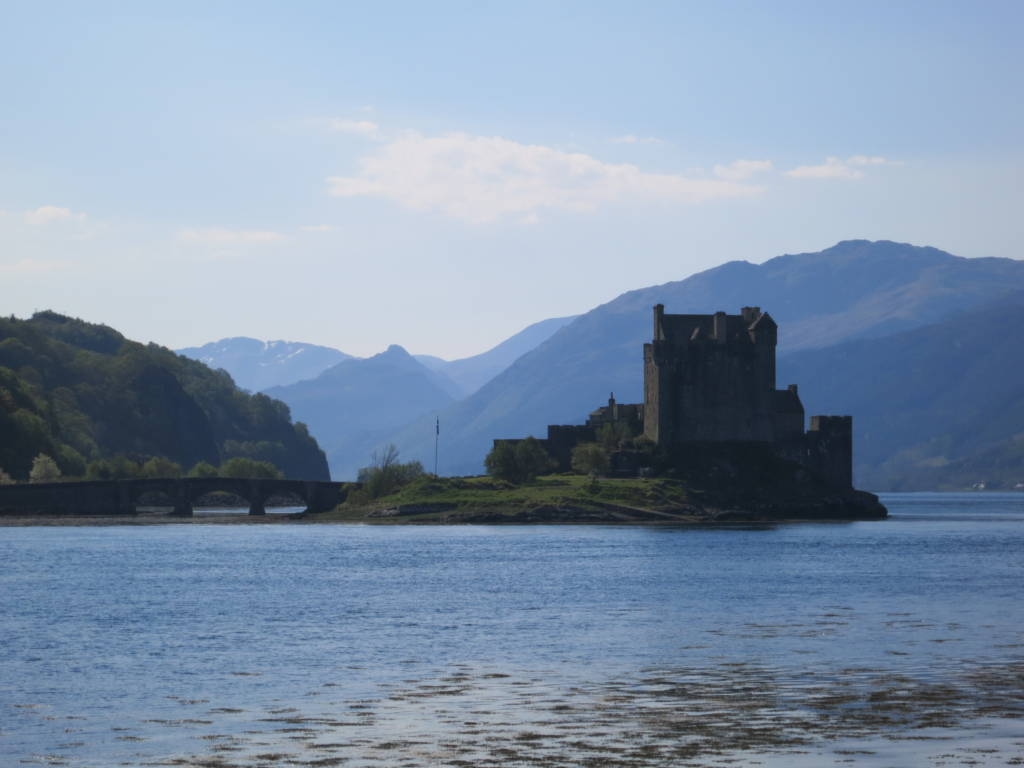 One of my favorites parts of the tour was a hike on Quiraing. I wasn't really sure what I was getting into (shocking) and had cracked a beer as soon as I got off the bus. The hike was actually a little more treacherous than I had expected. A few times I had to have a fellow hiker hold my beer as we crossed over fences and climbed over boulders. I got a few disapproving looks from those that passed by. This crazy hike had such gorgeous views, photos can't do it justice! 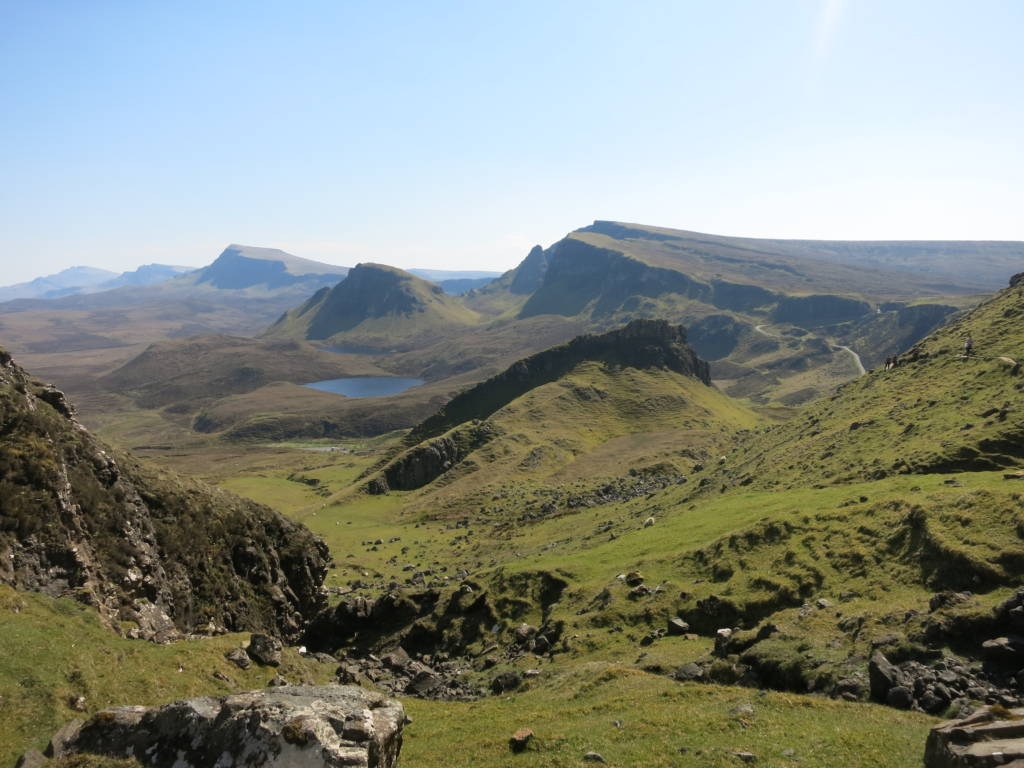 We also hiked to see the faerie pools. Faeries in Scotland aren't exactly what we envision - a cute little woman flying around, granting wishes, kind of like Tinkerbell. In Scotland, they are usually giant monsters that live in the water. A few travelers jumped into the ice cold glacier water. I just stuck my feet in… also because I didn't want to walk around in wet underwear for the rest of the day. See Mom, sometimes I make adult decisions. 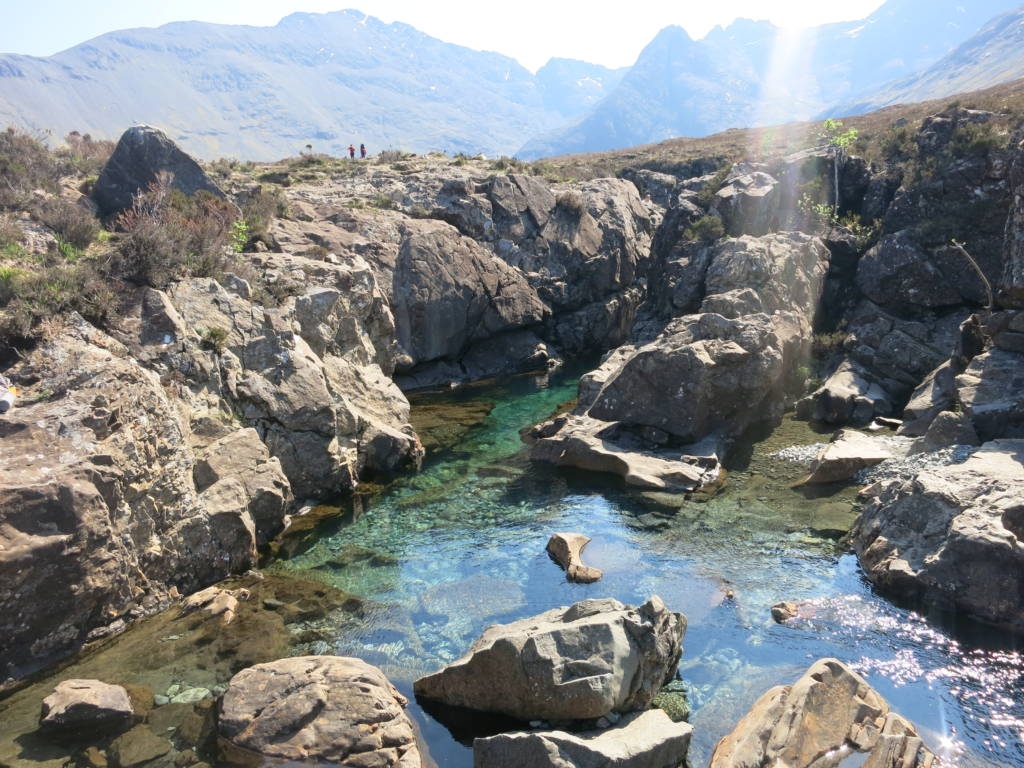 The Highlands of Scotland are formed from ancient volcanic activity, though these volcanoes haven't been active in millions of years.

There are tons of Scottish stories about the reasons some of the mountain formations came to be. Fortunately, our tour guide knew most of them.

The Five Sisters of Kintail

One of my favorites was the Five Sisters of Kintail. I am going to attempt to tell the tale, but let me assure you, it's better told from a Scot.

There was once a father who was equally blessed and cursed. He had six beautiful and talented daughters. He was cursed, because no one in the town was good enough to marry them. One day the youngest, Fiona, was walking along the loch and saw a ship coming in. The ship had obviously withstood some damage. When the ship came to the shore, an incredibly handsome Irishman disembarked. Fiona and the Irishman began talking and Fiona offered him a place to stay and their family would help him fix his boat before he returned to Ireland. 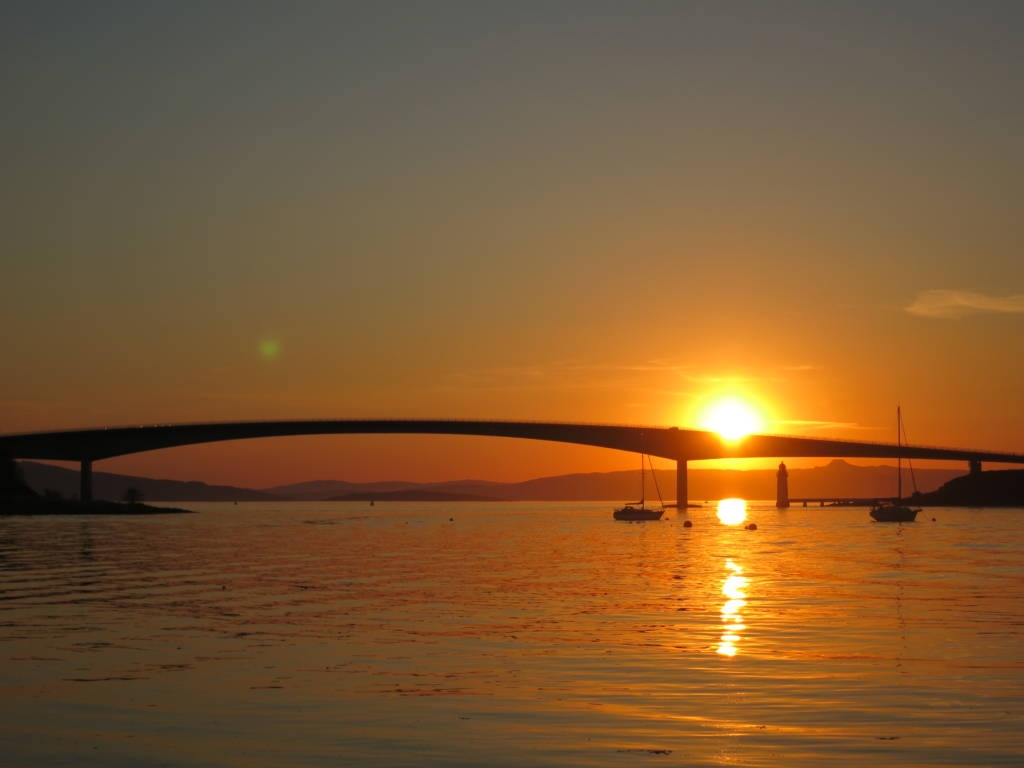 When Fiona's father and the Irishman met, you can only imagine what kind of drunkeness occured between a Scotsman and an Irishman. The two men spent the next couple weeks in a drunken stupor as the beautiful daughters fixed the boat (typical, right?). When the boat was fixed, it was time for the Irishman to return to his home. The father and man met for one last drink at the pub.

The father still had the issue of six beautiful daughters that needed to be married off. To alleviate his problem he offered his eldest to the Irishman. Unfortunately, the Irishman explained that hadn't fallen for the oldest daughter, but the youngest, Fiona. This posed quite a big problem, because in Scotland the oldest daughter was required to marry first. After the oldest was married, the daughters could marry in whatever order they pleased.

The Irishman thought about this and came up with a solution. He had five equally handsome and talented brothers back home in Ireland. He would take Fiona back to marry him and return with his brothers. This was the answer to all the father's problems. The next morning they said goodbye to Fiona and her new husband

The father diligently waited in the pub for his daughter and her new husband to return. Days turned to weeks, weeks turned to months, and months turned to years. ​The five remaining sisters were getting older and less eligible for marriage. The father knew he had a problem on his hands, so he went into the mountains to meet a witch. The witch gave him a potion and told him to go down to the pub and celebrate that his problems had been resolved. 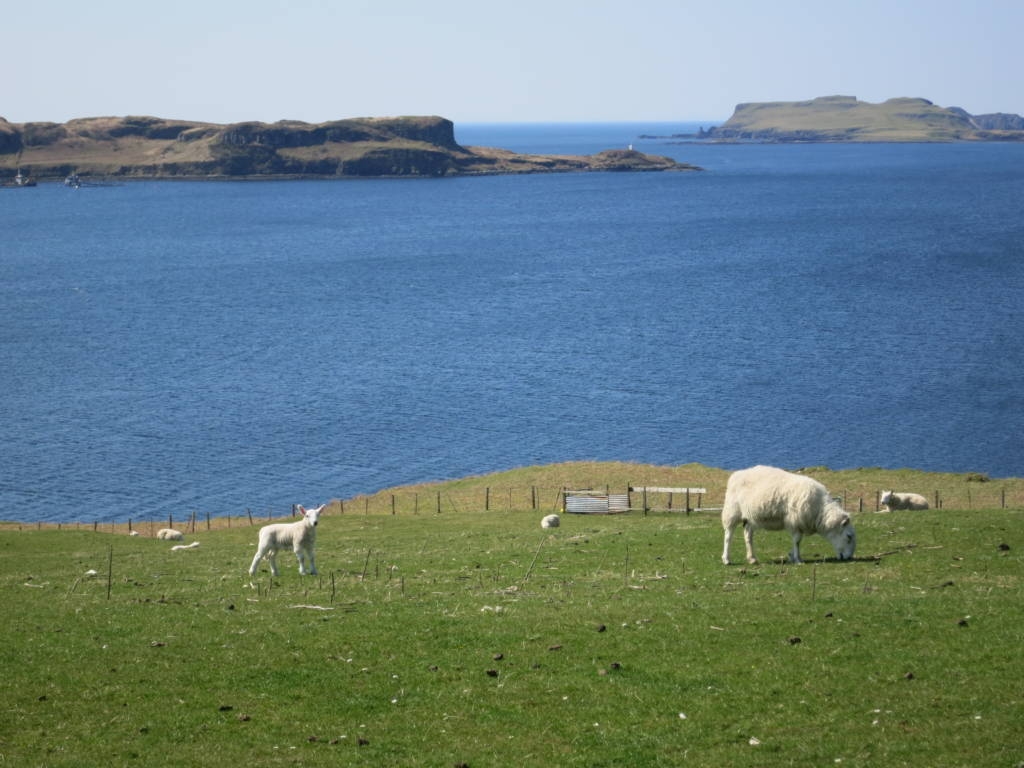 In ​the morning, the father woke up on the floor in a state of undress with a horrible hangover and noticed something wasn't right. Usually, one of his daughters would help him into bed, but this morning it was silent. He looked everywhere for his daughters, but couldn't find them anywhere.

​Angrily, he went to the witch to see what she had done with his daughters. The witch explained that she had preserved his daughters beauty and virtue by turning them into five mountains. 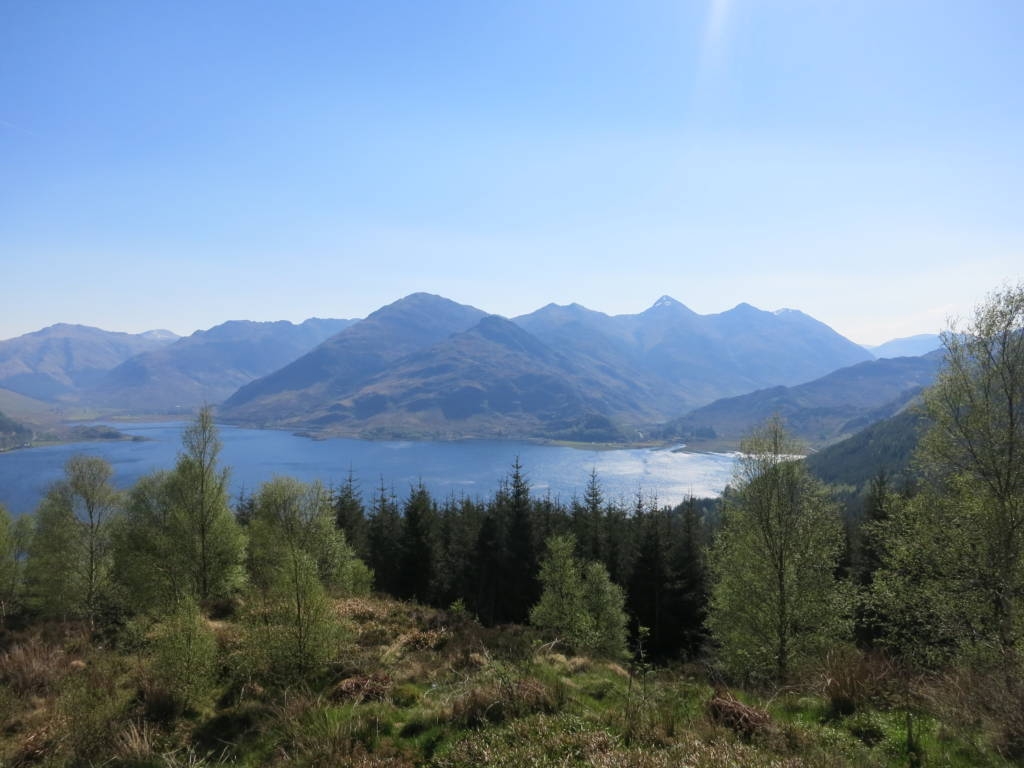 If you ever plan a trip to Scotland, don't miss the opportunity to visit the beautiful Highlands! My dream is to open a Bed & Breakfast that doubles as a distillery in the Highlands. I'm currently looking for investors (wink, wink)!

A Trip to Edinburgh, Scotland, Plus Potterhead Fan Locations
Ancesteral Roots in Hanover and Hamburg, Germany

Inside the Library of Congress Main Reading Room